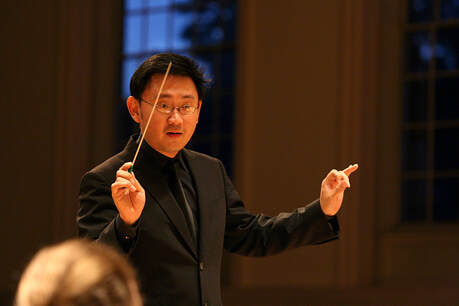 Recognized by the Denton-Record Chronicle as one of “2012’s Most Fascinating People,” the career of conductor Jason Lim is on the rise. Lim was born in Penang, Malaysia and began his formal training in viola performance when he won a scholarship to study at the Hong Kong Academy for Performing Arts with Alice Waten. He commenced his studies at the Canberra (Australia) School of Music, and completed his bachelor’s degree with honors at the Australian Institute of Music in Sydney. Jason received his Master’s degree in orchestral conducting from the University of North Texas.

Known for his fine technique in performances and innovative programming, Jason began his conducting studies in Australia: first as an apprentice with the Canberra Youth Orchestra, and later as an Assistant Conductor with the Ku Ring Gai Philharmonic Orchestra in Sydney, a position that was awarded in conjunction with winning 1st Prize in the New South Wales Ministry of Arts Conducting Prize. Most recently, in 2020. in a competitive selection process, Jason was selected by the Texas Commission on the Arts into the Texas Touring Roster Inclusion. In 2016-2017 Jason was the 1st Prize Winner of the American Prize Competition for professional conductors. In 2015 Jason was the 2nd Prize Winner. Additionally, In 2016 Jason received the Ernst Bacon Memorial Award for excellence in performing American Music.  In 2013 Jason made his European conducting debut with the Academic State Concert Symphony Orchestra of Ukraine in Kiev and in 2014 appeared as guest conductor with the Zabrze Philharmonic Orchestra in Poland and the Malaysian Philharmonic Orchestra in Kuala Lumpur, Malaysia. Jason has also appeared as guest conductor with the Abilene Philharmonic Orchestra and Johnstown Symphony Orchestras and has appeared as guest conductor with choruses around the globe. In addition, Jason's work extends to other art mediums such as visual arts and dance notably with collaborations with prominent dance choreographers like Bill Evans. Jason has also appeared as guest conductor of the Denton Bach Society and the American Baroque Opera Orchestra.

A champion of new music, Jason has conducted at conventions including SEAMUS Y2K (the acousma tex conference) and the North American Saxophone Alliance. In 2001, he was a guest conductor with the Composer’s Forum Orchestra which he conducted world premiere performances of aspiring young composers. In 2012 Jason commissioned the world premiere of BREATH by Brad Robin. During his tenure as Music Director of the NOVA Ensemble, Jason led the group in its first commercial recording in 2000 on the “Equilibrum” label. Jason conducted the world premiere performance of Brian Bavelander’s Distant Visions for orchestra and pre-recorded tape.

In 2010, Jason was among eight conductors selected to participate at the Ithaca International Conducting Workshop under the tutelage of Gustav Meier. Jason has also attended the Pierre Monteux School for Conductors in Maine. Jason remains an active performing violist, having performed with the Abilene Philharmonic Orchestra, Amarillo Symphony Orchestra, Las Colinas Symphony Orchestra, National Symphony of Malaysia, Australian National Opera Orchestra and Texas Baroque Ensemble. Jason was also a member of the University of North Texas Graduate String Quartet.

Jason is known for his commitment to community and a strong believer in education while dedicating his talents working with young musicians, and conducting orchestra workshops in Asia and the United States. He served as conductor and educator for 10 years with the Abilene Summer Music Festival in conjunction with Hardin Simmons University, the Pan American Music Festival in Edinburgh Texas, as well as the Penang State Orchestra Workshop in Penang, Malaysia and serves as Artistic Director of the Summer Music Intensives in McKinney, TX since 2015. Jason’s mentors include distinguished conductors: John Farrer, Nicholas Braithwaite, Henryk Pisarek and Max McBride. Jason currently also serves as Artistic Director of the Greater North Texas Youth Orchestra and is also Artistic Director of the Summer Music Intensives in McKinney, Texas.
​
Currently, Jason is the Artistic Director and conductor of the Odysseus North Texas Chamber Orchestra, a group he founded in 2012. In 2014 the orchestra was awarded second prize in the Professional Orchestra division of the American Prize Competition and third prize the previous year. Thanks to Jason’s commitment to education, the group pioneered a unique mentorship program that gives talented high school students the opportunity to perform side-by-side with professional musicians.