We are proud of our Youth Orchestra Concertmaster, Katie Cox (Violin) and Melissa Pearson  (Viola) who has been selected to participate in The McKinney Philharmonic Orchestra's Mentorship Program.

We are proud of our Youth Orchestra Concertmaster, Michelle Martey (Violin), Betheline Sarfo (Violin) and Samantha Preuitt (Bassoon) who has been selected to participate in The McKinney Philharmonic Orchestra's Mentorship Program.

We are proud of our Youth Orchestra Concertmaster, Shaunessy Renker who has been selected to participate in all of McKinney Philharmonic Orchestra's Subscription Concerts as a Mentorship Program Participant. ​
“Having the opportunity to play with the Odysseus Chamber Orchestra through the mentorship program was incredible. It is an entirely different experience playing with professional musicians where you really learn how to blend with the rest of the orchestra. It was a treat to learn the ins and outs of being an orchestral musician and discuss with all the players over what kind of sound to aim for. You have the opportunity to build your repertoire and establish connections with all these amazing musicians. I will never forget my time with Odysseus, I learned so much and was able to improve my orchestral playing.”
​
Shaunessy Renker
2018
We are also proud of Maren Flechsig who has been selected to perform in two of the McKinney Philharmonic Orchestra Subscription Concert Series performances. 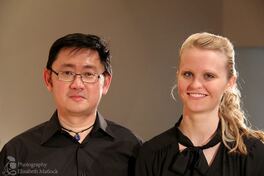 Maren Flechsig - violin (Junior) , Home School (Member of the Frisco Youth Symphony) with Maestro Jason Lim, after the Family Concert Series of Peter and the Wolf

I had the great honor of rehearsing and performing with Maestro Jason Lim in November of 2015. I am senior currently at Wakeland High School in Frisco, Texas. The experience was like no other before. The orchestra was tight knit, more akin to family than friends or acquaintances.

The rehearsals were much more productive in comparison to school orchestra rehearsals. Maestro Lim always knew what he was doing, the exact sound that he wished to create through this harmony of instruments. At the first rehearsal, however, I was not sure what to expect. I had performed and participated in other ensembles such as the Greater Dallas Youth Orchestra, and All State Orchestra, but never in an actual adult organization.

​This was a key step in experiencing what the musical world beyond high school would be like. It was incredible how in just a few rehearsals we could go from complete dissonance to a professional performance. I would recommend all aspiring musicians to partake in such an experience, as it is vital to learning what one truly wishes to pursue as a career.

Sincerely,
Benjamin Hsu, Cello
Wakeland High School"
Testimonial Letter from Daniel Chan
I want to express my appreciation and support for the mentorship experience that I was grateful to be a part of. As someone who hopes to pursue a career in music performance, one of the most valuable tools that is available to me is being able to work with and learn from the examples that this orchestra set.

​I was fortunate enough to have this type of experience as a member of the Odysseus Chamber Orchestra. The knowledge and advice that these orchestra members had for me is priceless and I know that it will benefit me many times in my future.

﻿ "What a pleasure it has been to be able to perform alongside such a prestigious group! I am truly honored to have been invited to be a part of the Odysseus Chamber Orchestra. Having participated in the mentorship program has allowed me to bask in the raw, unprecedented beauty of music, due to such a high-caliber repertoire. Throughout the week that I had engaged in the program, I was given a chance to hone in on technical precision, as well as musicianship. Following the final concert, I regained an affinity toward music, as well as my ability to "think in sound". I am grateful to have acquired a complex range of musical abilities as a result of participating in such a wonderful program."

"Thank you once again for giving me the opportunity to play with the Odysseus Chamber Orchestra. The experience of rehearsing and performing with professional musicians was unlike any musical experience I'd ever had, and through your leadership, I've gained a greater appreciation for music. Playing one of the greatest symphonies ever written was an incredible blessing, and I am glad that I was able to make music among people who have a heartfelt and genuine passion for music-making. I hope that all goes well for your organization in the future, and that you will become an integral part of Frisco's burgeoning culture!" 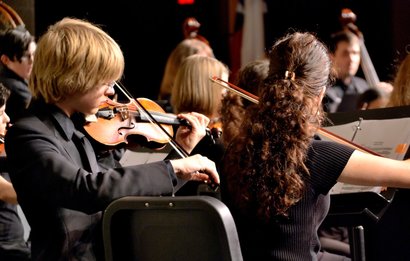 "My experience in the Odysseus Chamber Orchestra was like nothing I had ever experienced in high school. It was the first oppourtunity I was given that enabled me to play a professional program of music with career musicians who have the same ability and passion for music that I hope to have in the future. It was inspirational to sit among them and play alongside them."

"Odysseus gave me a confidence boost as well as a lesson in performing with an orchestra. Now I know for sure that I want to pursue music as a career."

We are excited to discover the enormous talent in Frisco and McKinney high schools and have their names added to our list of participants.